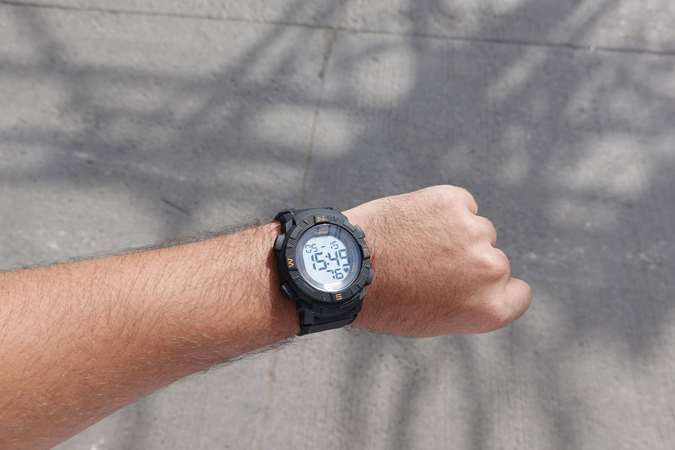 Well, I have had my couple of weeks of running, hopping, and falling with this watch and now I have a fair bit of idea how the fitness tracker holds up. So, here’s my full review of the Lenovo Ego Black Smartwatch or just Lenovo Smartwatch, I just don’t like the name.

Before we begin, here is a detailed list of specifications for the Lenovo HX07 Ego Smartwatch.

Since the advent of Mi Band 2and it being a good-seller in India, we have had a whole bundle of budget smartwatches being thrown at us. And do you know what’s the most common thing between them? Design and the looks. Each of them follows a similar design pattern or aesthetic. It is hard to distinguish Mi Band from the Honor Band and the Honor Band from the FastTrack Reflex. For that point, I feel Lenovo did a great job to follow a different path. The watch certainly looks like a G-Shock rip-off but Hey, they are copying the good stuff.

The smartwatch looked rugged and heavy in the pictures. But to my surprise, it weighs only 45g. To give you a perspective, my G-Shock weighs in like 200 gms. For someone using that, the Lenovo Smartwatch feels light & small. It has been built like it could take a beating and oh man, I have used it while running, playing football and all kind of sports. It still stands good, no scratches or scuffles. While it has gotten dirty after all the activity and I can just put it under the tap to wash it. The smartwatch is waterproof but there are no traces of IP certification. The Flipkart product page says 5 ATM waterproof which means it has been tested to last up to 50m in water. I am no swimmer so I didn’t want to risk my life for the testing. Rather I regularly have a shower with it and everything seems to work well. The heart rate sensor still works perfect and so does the buttons.

And talking about buttons, coming to the most important part of the device that helps you interact with it – Buttons. There are four of them, two on either side and they all just suck. The buttons don’t give good haptic feedback when pressed which makes me clueless at times. They are just cheap, I said it. My cousin has an Rs.600 (or $9) local watch and that has better buttons than this one. And if that wasn’t enough, the start button doesn’t work on my unit. We are still waiting for a replacement of this unit but if the same scenario happens to you, remember this article & Lenovo!

A quick glance at the display and you would feel nothing special. It’s the same old electronic display you have been getting all the while with digital watches. But in the hindsight, if I think about electronic displays, it pretty much makes sense here. Now all these smart bands with their OLEDs and AMOLEDs have spoilt us so much that we don’t realize the functionality of this electronic display. The thing is, these fitness trackers are supposed to be used during sports activity or intense workouts. So during these events, when you look at the display it needs to be visible. Be it direct sunlight, pitch darkness or indoor light, the display is visible all the time. That’s what puts it ahead against Mi Band 3 and Fastrack Reflex.

Talking more about the display functions, it is pretty basic and you don’t have the options to modify it. You have a Mode key which lets you toggle your data. The mode key shows you the step count, distance covered, calories burnt and sleep time. The other key for Reset lets you measure your Heartbeat or start a Timer. The timer is supposed to be triggered by the Start button but unfortunately, the Start button on our device doesn’t work. You also have a light button in case you want to see the display at night time. It triggers a neon blue or greenish backlight which makes the display glow in the dark.

Talking about the features of the Lenovo Ego, this is what makes me say that it is a fitness band. It is more of a fitness band trying to do smartwatch stuff here and there. So, it’s wrong to tagline it “Smartwatch”, it’s not. Apart from calculating your step count, Lenovo Ego tells you the distance covered and calories burnt. I manually tested it out and it’s fairly accurate. The device data is 10-15% lower than the actual step count which is not bad for this price range.

Another feature includes sleep tracking as well. This was the section I had faint hope from. Generally, all the budget smart bands are extremely bad at sleep tracking and this one is no exception. In my testing, it was able to recognize the sleep time when I lie on the bed. That’s accurate mostly because I am off to sleep as soon as I lie on the bed. But strangely, it cannot differentiate between sleeping and lying around. Well, I believe that’s too much to ask for an Rs.2000 / $29 device. But, just to put out a note, it’s not accurate.

And to end the list, you have the call, message, and third-party app notification. But it can only provide you an icon when you receive a call and a banner text saying “Message” for every third-party notification. There is a predefined list of third-party apps you can choose to get notifications from. The band also has some other standard features like Find my band, outdoor activities, exercise planner, etc.

Read:  How to Control your Android Camera With Your Mi Band

The biggest advantage of having a chunky size and electronic display is battery life. You can fit in a decent size battery and the electronic display doesn’t take much of it. So, with the continuous heart rate sensing on, the Lenovo smartwatch can last anywhere around 10-12 days. For normal fitness tracking usage, you can clock it up to 15-17 days. What’s a bit annoying is the smartwatch charger. It’s a proprietary charger with magnets on it and it does stick to the back of the device. But it’s pretty easy to knock it off the pin and leave it unplugged.

While the charging speed is quite fast and it takes about an hour to completely charge the device. The sad part is I couldn’t see any chargers online for it and in case you lose one, you will be in a problem. It’s not a deal breaker though!

Now, here’s the biggest letdown part. For me, the app is an integral part of a smartwatch or a fitness tracker. The app is the source from where you can view your fitness data, analyze it and act accordingly. The Lenovo Life App lets you do that. It connects to the device and synchronizes the data between the phone and fitness tracker. If I go ahead and compare this app with Mi-Fit or Huawei Health, it looks half baked. The worst thing it wasn’t able to sync my sleep data to the app. It just shows as blank while the step count and everything is being synced.

Another let down is the third-party app notification support. You have a preset of apps defined in the app whose notification you can enable. You cannot choose from the list of installed apps on your phone. The worst thing is cannot customize the data I want to see on the watch. Supposedly, if I don’t want to see calorie count, I can quickly disable it in the Mi-Fit app or the Huawei Health but I don’t see that option in Lenovo Life. This app itself could be a deal breaker for me or many people.

So after all of this said, who is the watch for? If you want to buy an analog watch which can do a little bit of fitness stuff than you can give it a shot. But, in case you are looking for a smartwatch don’t fall for the name, go for Honor Band 4 rather. The Lenovo Ego is a good fitness tracker but certainly needs a lot of polishing to be called a smartwatch. It does bring back nostalgic analog watch days but hey we are too spoilt by the smartphone era.

For any queries or issues, let me know in the comments below.